REI Is Proud to Support Kyle Busch in The Snowball Derby

No Rest for Rowdy

MOORESVILLE, N.C. (Nov. 28, 2012) –While most NASCAR drivers have already hung up their firesuits, helmets and gloves for the season, Kyle Busch closes out his 2012 racing schedule this Sunday, Dec. 2, driving the No. 51 Monster Energy Camry in the 45th Annual Snowball Derby at Five Flags Speedway in Pensacola, Fla. The Las Vegas native returns to the prestigious Super Late Model race for the first time since his victory in the 2009 event. Joining primary sponsor Monster Energy, as associate sponsors for this weekend’s 300-lap event, are Choice Hotels, Quality Imports Toyota, Recycling Equipment Inc. and Tom Thumb.

“The Snowball Derby is one of the best short track races in the country — it’s been around for a long time and draws in some of the most talented drivers,” said Busch, who will be making his third career Snowball Derby start. “It’s a huge race that a lot of people want to win — whether you’re a guy that comes from the late model ranks or a guy that comes from a different background, you always hear about this race. My last time there in 2009, I had a really good car and we were able to win it. It was pretty phenomenal and I took a lot from it that hopefully we can put towards this year and get to victory lane again.”

After starting from the third spot in the 2009 race, Busch led three times for 89 laps – including the final 25 – en route to his first Tom Dawson trophy. Prior to the victory, his lone start at the half-mile oval came in 2002, when an early accident relegated him to a 33rd-place finish.

Busch, who made a name for himself racing as a teenager at The Bullring at Las Vegas (Nev.) Motor Speedway, has two victories in five Super Late Model starts in 2012. The 27-year-old opened the season with a win in SpeedFest at Watermelon Capitol Speedway in Cordele, Ga. in January and followed it up with his third straight triumph in the Rowdy 251 at Berlin Raceway in Marne, Mich. in June.

“It’s been an up-and-down year in the Late Model races — we’ve had a few wins, but we’ve also torn up some stuff and haven’t been able to make it to the finish the last few races,” Busch said. “Running these races is enjoyable for me. These are my favorite type of race cars — the cars look good and drive good. The 300-lap or longer races with live pit stops are my favorite ones to race in. Racing on short tracks is what I grew up doing and I enjoy giving back to the sport by running a half dozen of the big races around the country each year.”

Get a quick decision within the hour and be funded within a few days. We can finance your Equipment, Shipping and Installation Costs! Up to $250,000 approved by Application Only with approved credit and industry experience. Two Ways to Get Approved… 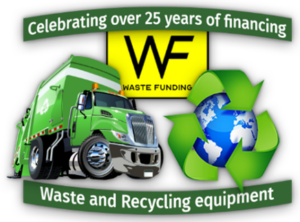 Waste Funding has been serving the waste & recycling industry for over 25 years! We can turnaround a credit application in 1-2 hours & fund within 24 -36 hours. We can finance the equipment cost, shipping, installation & sales tax. Application only up to $250,000 with approved credit & industry experience. We will finance $10,000 – $1.5M, terms from 12 to 84 months (with credit approval), money down, no money down & deferred payment programs available.

At REI, we believe it’s not just about selling equipment. It’s about solving problems. Solving complex problems in dealing with waste that impacts on your business, the environment and our lives. Let us help you solve your problem.

Get A Quote
ROI Calculator

REI goal is to help you make a good buying decision. For most buyers, this type of purchase must make financial sense in order for it to work long term. The basis of a ‘return on investment’ calculation is what we call, C.U.P. – or ‘cost per unit of production.’ You must consider all of your associated costs, not just the cost of the equipment.

There are 5 Key Cost Components to the Operation of your Equipment:

Let us help you make a good decision

Answer a few questions and we will produce for you an ROI Summary that will give you a very good idea of what type of equipment you need, how much you can expect to spend and if the investment make sense given your available output.